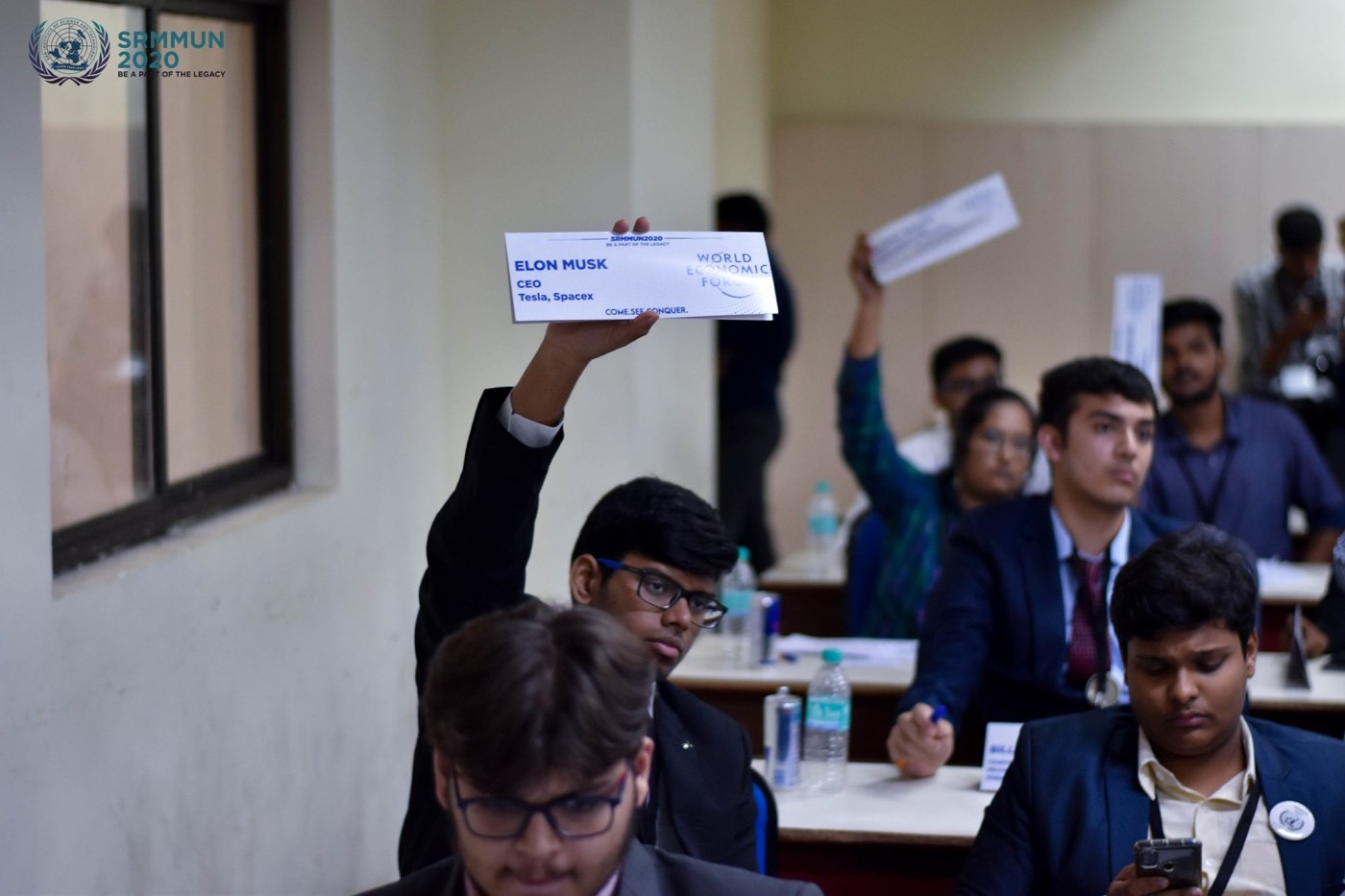 “Dude, I literally thought that was the actual Elon Musk speaking when you spoke”. “I felt you were very good at representing Elon musk. You were also depicting his real character, like how he thinks and how he speaks in a conference”.

After my debut experience at YLGC MUN 2020, I was left longing for more diplomacy. I really wanted to do more MUNs and that was when I heard about an upcoming MUN at SRM University. The registration was almost closed. But fortunately, I was able to apply and got allotted to Elon Musk in the World Economic Forum.

For those of you that don’t know, WEF is not a conventional committee where we represent countries and where diplomats and are heavily restricted by their country’s foreign policies. But in the WEF, we represent individuals, Corporate executives, world leaders, and organizational heads. Even actors. SRK was there. This means that we can say whatever we want as we are individuals and are only bound by our own principles.

So I was pretty well prepared as I did a bunch of research for the past couple of days and I was confident that I could speak well. Now, I was the only one delegate from my college, so it was pretty lonely at first, but at the registration, I met a few people from PSG Tech who was also in my committee, DG of WTO and Mukesh Ambani. The three of us were pretty much mostly together for the rest of the three days. They were really kind and gave me a bunch of advice as they were experienced delegates. We had breakfast before the opening ceremony at Subway (my first time) with the other delegates from PSG.

The committee soon started with the Rules Of Procedure (ROP). It is then continued by the roll call. That was the first time someone called me Elon Musk. It felt absolutely mind-blowing. Side note: I am a huge fan of Elon and his goals. I’ve read his book thrice now and follow him constantly. To have the privilege of actually being him in a place that is not in my dreams is unbelievable.

By the end of the day, I was well aware of how competitive the committee was. I was told by other more experienced delegates that this one was a lot more competitive than usual.

We were taken to our hotel rooms that night. We stayed at the OYO TownHouse. The rooms were pretty good. My roommate was a very experienced delegate from Andhra who had a winning streak for the past couple of MUNs. He was France in UNSC, which is pretty much the hardest and most exclusive committee. I was very lucky to be his roommate as he gave a lot of advice and taught me how to speak and do research more effectively. He gave me a lot of do’s and don’ts. He eventually went on to win Best Delegate in his committee, which practically meant he was the best delegate in the entire MUN.

That night, with his help I did some research, sent the working paper with my solutions and slept early as I was too tired from the bus ride, from the previous night.

The second day was a lot of fun. I had friendly quarrels with my “enemies” and “rivals”. One of the best of those were with the Premier of China. She was a very experienced delegate from Christ University, Bangalore. We “fought” a lot regarding the US-China Trade War, and how it was affecting Tesla’s prices in China. She unsurprisingly brought up my past conspiracies like the weed-smoking, taking tesla private debacle, the SEC investigation, and other stuff I had myself no idea about. I retaliated with china’s lack of human rights, it being an authoritarian regime, concentration camps, etc. I wasn’t going to back down. No one insults Elon Musk.

The mod cocs we had that day were slightly more inclined towards my interests. I gave speeches that detailed solutions that benefitted tesla in various industries. Even SpaceX at times.

The most surprising part was that literally, every single delegate spoke at least a few times. This is not a very common thing, especially in a challenging committee like ours.

After the committee, we had the Delegate Dinner in the famous SRM Tech Park. After that, the guys from PSG and I got a cab and left for the hotel as it was a very long day and the bus wouldn’t leave for another hour. I had an hour of sleep then went to my friends’ room and sat there for the next few hours talking about their different MUNs. The organising committee for YLGC MUN 2020 also came to our room and was talking about weird and funny experiences they had while organizing the MUN in PSG. That night I learnt about the massive logistical nightmares that are involved in organising a national level MUN.

The third and final day was the best in my honest opinion. It was the day we had to prepare our report.

In the morning we had our normal session where we talked about geopolitical issues and other stuff. After that, we were told to start our work on the report.

Now, in a normal MUN committee, you would prepare a few draft resolutions on behalf of countries, would have a couple of authors and signatories and then you would discuss and vote upon which one would pass.

But this wasn’t a normal committee. Here, we had to prepare a unanimous report detailing all of our solutions in one document. So technically we were all authors. To speed up the process a bit, We decided to spit the committee in three and write it up separately and then join them together later. The groups were split into; a) Industrialist and Executives; b) Organizations and Monetary Agencies; c) Country Representatives and leaders.

We had to do this in 2 hours and we ended up not having enough time to properly compile the full document. So we asked for extra time but were not allowed since we needed to get on with the GSL. So we ended up excusing ourself and left the committee and finished it outside. It was really funny.

We finally finished the report and submitted it. It wasn’t perfect, but we gave it our best shot in the time constraints.

After that, I still had a GSL left. I was the second last to speak. I used it to give an emotional speech about how amazing and endearing the past three days were. I talked about the incredible personalities that were present there and wished I would see them again the next year.

The committee ended and the chair left to do something. This gave us all time to finally break character and talk to everyone. I got everyone’s contacts (networking is vital in these conferences) and talked about a lot of general stuff. I started a WhatsApp group to keep everyone in touch. On the way to the auditorium for the closing and award ceremony, we pretty much had a diverse group of friends from different places in India as well as the World. We discussed our favourite movies, YouTubers, TV Shows, songs, bands and a whole range of other stuff. It was fun.

Finally, the moment we have all been waiting for arrives. The announcements for our committee was towards the latter half so it was a long time till our awards were given.

SO DID I WIN ANYTHING???

I was pretty devastated, to be honest. I felt like I spoke really well for my second time, and so did the others. When I asked the chair for my feedback, they said my speaking, communication and lobbying skills were great. but I lacked research and substantive chits. I too agree with them. I didn’t know that substantive chits held so much value. They said I was in the top 15 and for a second timer that’s pretty good. But not good enough for me. I learnt it the hard way and I sure am gonna go guns blazing with research next time.

HERE ARE MY SPEECHES IN A VERY UNORGANIZED DOCUMENT.

HERE IS THE WORKING PAPER OF AN EXPERIENCED DELEGATE.

This is an excerpt from the President of the AIIB,

“So this was my first proper experience of the Model United Nations and I couldn’t be more amused by the unity, fun, knowledge, excitement and friends I gained from here. Everything from the characters in our committer to our chairs served as my role “MODEL”
The feeling of interacting, discussing, lobbying as well as arguing and going against such huge personalities in the real world was itself something remarkable.
Here is where I could see SRK so silent as well as constantly promoting Red Chillies, the cool, crazy and fun side of Benjamin Netanyahu🤪, Mr Premji as the CEO of Infosys😆, our Sec-Gen speaking faster than the real Sec-Gen😜😂, Mr.Gates being so obsessed with AI, AI and AI and finally the AIIB president speaking so diplomatically etc…🤣🤣
Overall this was an experience too good to be defined in the few words that I have used😂”